On Tuesday, March 29, 2011, the Boston Red Sox played their final game at City of Palms Park in Fort Myers.  For the 2012 Florida Grapefruit League season, the Red Sox will debut Jet Blue Park, an 11,000 seat stadium, just off Interstate 75 in Fort Myers. 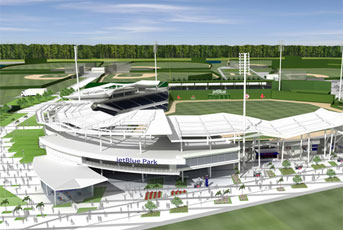 Features of the new park will include a Green Monster wall in left field to include a fan area in the wall halfway up.  Essentially, it will be a hold carved into the wall for fans.

The new facility, scheduled to open for the 2012 Spring Training season, has been informally referred to as Fenway South because it will resemble the team’s fabled Boston home, which will turn 100 next year.

The new Red Sox spring training home boasts six lighted practice fields that will also be available for use by Lee County’s youth sports programs.  A new hotel, shopping center and restaurants are also planned as part of the 80-acre development.

Individual Game Tickets for Spring Training went on sale, Saturday, December 17 and will be available at www.redsox.com and also by calling (888) 733-7696.
Click HERE for 2012 Red Sox Spring Training Schedule