Move Inc. compiled a list of Top Turnaround Towns for this month, using year-over-year housing data from the first quarters of 2012 and 2011.

Many of the cities in the top 25 that have seen the biggest boosts in price appreciation are also seeing a big drop to inventories of homes for-sale. Some of the states that suffered the worst of the foreclosure crisis such as Florida, Arizona, and California have cities represented on the list, and are showing some of the biggest signs of recovery. 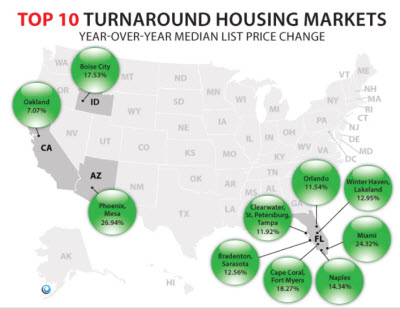 The following are the top 10 turnaround markets, according to Move Inc.’s report from May (including the year-over-year median list price increases).