According to a recent article in the Wall Street Journal, there is yet another reason to love the Sunshine State for vacation travel … low travel tax.

Three cities in Florida are rated the lowest for taxes on lodging, rental cars and meals.

Across the U.S., even though most cities and towns try hard to encourage visitors and tourism, travel is one of the most heavily taxed activities in the U.S.

Travel tax revenue is often used not only to build and run facilities for travelers, such as convention centers and airports, but also to help finance general coffers and pay for sports stadiums and youth ball fields.

According to a study published last month by the Global Business Travel Association, some cities even tax visitors to help fund arts facilities and school systems.

And the impact can be significant. The GBTA study states that travelers pay taxes that total, on average, 57% more than if they just paid the normal general sales tax.

Many believe that heavy taxes on travel can dampen demand.

A survey by the U.S. Travel Association found 49% of respondents had altered plans because of high travel taxes, such as by staying in less-expensive hotels and spending less on shopping and entertainment. However, only ten percent of people surveyed said they had changed city choices for trips because of taxes.

Three Florida cities, Fort Myers (Lee County), Fort Lauderdale and West Palm Beach tied for the lowest overall taxes among the top 50 destinations in the U.S. in the WSJ article.

The top three were Chicago, New York and Boston. 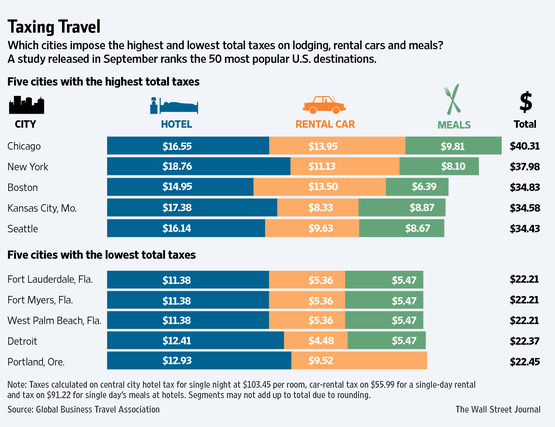 The tax on a day’s travel spending can range from as little as $22.21 in Fort Lauderdale, Fort Myers and West Palm Beach, Fla., to as much as $40.31 in Chicago.

The study calculated each city’s tax by keeping the cost of hotels, car rentals and meals the same in each city so the difference reflects the tax structure, not higher or lower travel costs.

So come to Fort Myers, Florida (Lee County) and cut your travel costs!